It's been a hectic time recently, late Wednesday afternoon I received an e-mail with a flight ticket to SVO in Moscow on Monday. Normally I confirm flight bookings, but this time I simply received the ticket in the attachment with the underlying sentence "go on Monday". It wasn't exactly a surprise, considering the paper work I again had to do for the Visa application (picked up my passport this morning), some administrative stuff at work, and trying to force some documentation of the DAQ infrastructure I need to integrate our detector into (of course when I asked myself twice I got nothing, but when the big bosses hear about it I get the documentation immediately), but it was a bit funny. I still have to gather a few items I need to bring in my luggage that didn't make it into the huge truck for the detector + everything else (when will things ever be done properly here...). On to the next adventure!

Went to another concert yesterday evening, a French quartet played Mozart, something modern (2016), and Mendelssohn. They did the modern piece very well although I'm not too fond of that kind of music. They also did the intense parts of the classical pieces well, but I feel a common "issue" with many performers is exactly this; the "boring" parts are the most important for a performer because they require the most focus and care, whereas the "fun" parts play themselves. I always complain... It was a very good quartet, and it was a unique performance for just 13.50 EUR, so I'm happy.

On a similar topic, the last time I mentioned rosins, I praised Bernardel. Cold dry weather has returned, and I've become more aware of what I'm doing, so the Hill Dark is my current go to rosin. I'm glad I bought both. 3rd position and bowing getting more stable and smooth, gotta keep going.

Still waiting for the keyboard kit, I hope it'll arrive today or tomorrow, or the post might send it back before I return from my trip... But then I'll spend my trip thinking non-stop about building the thing.

Ashes of Malmouth is excellent, but feels, uh, "spretigt", I can't find a good English word for that. Erratic or irregular, not very well focused, and things don't tie in as well as in the main game. But oh boy is a Skelemancer a ridiculously fast leveling build, I hope it'll keep up as my friend with his super burning Purifier and I go along. Sudden insane boss encounters have been fun, all in hardcore mode of course. 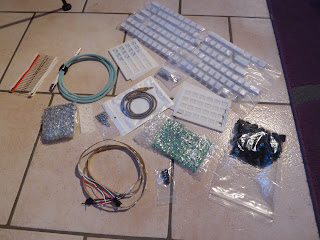 Nay: I can't build it since I'm going on the business trip :( I'm gonna be amazingly home-sick.
The list of items and the photo on the seller's website didn't show all the goodies that I received, the cables are really very nice for example. I was looking for a black cheapo TRRS cable on ebay, but the one in this kit has a metal coil all the way around it. If curious, and if you live in Europe, click here.

Also kicked every last butt in Ashes of Malmouth this evening. As usual the final boss is cool, but by far not the hardest along the way; that award goes to the jerk in the void rift. No, not the one with the trailer music and just before you meet Ulgrim again, but the similar creature in the next void rift. Of course this is nothing compared to the crazy people who have already slain every new nemesis and super boss, just goes to show I'm actually doing other things too... And still the most dangerous thing in the game is ground sh!t. No wait, doing stupid things, that's the most dangerous.

Posted by Hans Toshihide Törnqvist at 11:59 No comments:

Should have stayed retired

Blade Runner 2049. Finally happened. And it was exactly, precisely what I had expected. Of course it had to be about a kid, the chosen one... But I won't dwell on that banal spectacle.

Why is everything so clean? Dust, sand, and blood was never that pretty. And why is everything so deliberately placed? It was the perfect concoction of every yt-clip about how to make pretty films. And I just realized right there I have watched too many of those...

Where's the music? *WHOOOMP* *BRRUUMP* *KRAAAAK* for every cut to a new location, I couldn't stop myself from giggling a bit after the 10th time. That was, what, 10 min into the film? Couple of Vangelis-style waveforms here and there, that's all. Ridiculous.

Where's the speech? No c-beams, no attack ships on fire? Did nobody like owls? What about turt-, I mean tortoises being flipped over? Nobody cared about involuntary dilation? I don't remember anything anybody said! Oh wait, "You thought you were the one, didn't you?", I remember that. Aww, you poor little shit. Something about seeing miracles early on, but that never really came up again.

What's up with all the female nudity? And I'm really not a sjw, so let me put it like this: I suppose that one joke "how many feminists does it take to change a light bulb?" is actually slowly gaining traction :p I was thinking very briefly it had to do with a Frenchman being heavily involved, but iirc there's very little of it in his other work. I really, really want to watch Sicario btw.

The lady bad-guy Luv was good.

Anyhow, grumpification aside, incredibly well made. Technically it's perfectly pretty, has the boomiest possible sound effects. Don't wanna break the cow. I mean, imagine it ending up like the first film, hated and then slowly turned into something incredibly important by the ravages of time, who wants that? The closest thing we've had to the original Blade Runner was Deus Ex, and we haven't had any games like that since... Oh my, I must install that again! *niche joke*

I'll watch Blade Runner many times in the future. Blade Runner 2049, not so sure. I did hate the first one the first time I saw it, I didn't like Meshuggah, I didn't like Carpenter Brut. The difference is that these overwhelmed me and I couldn't fit them into my little head, whereas all of 2049 is rattling around in there :/ (The lack of interesting dialog helps compress the information.) I find it strange that everything about it is so universally super-praised by everybody, but I also don't understand why Nolan films are so amazing either. I suppose I'm not a film buff of this time. But yeah, wanna watch Sicario.

One last thing, it's too long. Hah!

Posted by Hans Toshihide Törnqvist at 02:42 No comments: 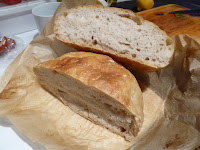 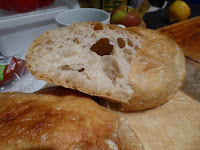 Posted by Hans Toshihide Törnqvist at 00:52 No comments: