I'll break my rule regarding keeping this strictly as a diary with this post, but it's a large part of my thinking whenever I think about games these days, so here goes. Plus it's another blog post.

When I think of games, I think of interactive virtual worlds that make me forget the real world I move around in and feel the battery of emotions that I cannot get any other way. E.g., I would never play a game to replace a book (induced visual and psychological imagination), a movie (dynamic input in a short-burst), a TV series (long-time visual development) and going out with trees whispering around me ("meditation"?). These media do what they do exceptionally well, and games must do their thing exceptionally well. And that is to provide a world, possibly inhabited by characters, with which you can interact over and over (action, response, iterate), not to provide a movie with action sequences.

Two of the most generally well-received games in recent history (or even ever?) are Bioshock Infinite and The Last Of Us. Imho, they're rubbish.

TLOU: It's a movie with a game tucked underneath. Emotional intro sequence, a mission, lots of killing and an emotional ending that ties to the intro with a cute face fading to black. Games like this will forever be comical, in how cut-scenes that can make grown men cry (yt comment...), swiftly move over to hundred-fold cranial crack-o-mania with steel pipes and so on, we all know how it works. A set of directed sequences with serious things in them, intertwined with you shagging and hammering every corner, crevice and random small object in the game. IT DOES NOT WORK, oil + water. And it amazes me that nobody sees it. No matter how serious the story is, the whole package is laughable. Which is why NOLF works, because it's about laughing from the get-go.

BI: An idyllic doll-like environment explodes by a deviating ball and suddenly you crack necks and crack skulls (this thing with head trauma...) with a spinning metal wheel left-and-right, you see magic and then everything goes mental and your daughter kills you and you live again and infinity and all... And people are trying to put meaning into this, they analyze it with popular science and are trying to pull parallels to the real world out of their reference section. *sigh* This time the story-telling is part of the game, which is better. But now it's a story suffocating a game. I'm thinking, Columbia is a terrible place, why do I have to kill everybody, can't I go find a parachute and jump off? It's a city in the clouds, there should be parachutes everywhere. "But books, movies and TV series are even more linear!" I hear you cry. Yes, they are fixed linear accounts of some stories, that's their deal, it is what they are. The deal with games is to add interaction. Forcing a linear account into a game is like holding down a horse by its reins, with the human participants analyzing the emotional behaviour of trapping of a beautiful animal (personally I find them too nervous and detached to feel much for them, but whatever) and trying to see the similarities with the trapped group in The Walking Dead that we all root for. (OT: The Walking Dead is the epitome of Zombies gone bad, I'm not so sure I'll watch the next season.) So what would letting the horse loose mean for BI? Trying to escape Columbia, while collecting notes and listening to NPCs and learning that a fellow companion has done certain things and you can choose either to stick with, leave, kill or whatever that companion, and it would not end with an infinite number of light-houses that similar to Olber's paradox would make no sense.

I never played either of the games, thanks to youtube. I watched the "oh so amazing twist at the end" and I wonder how something so weak gets so much attention. Then I looked at playthroughs and, as always, it's all the good old action adventure from the infancy of games. I stopped playing games, mainly because they try to compete with media that did it better. But why did movies come about in the first place, why not just keep the books? Fact is, a lot of movies are shite and are easily surpassed by books. The two things books can't give you is a time-lapse out of your control and visual input to take your mind further. TV series? They have the long running time for more development. Games? They have the interaction and choice. Media that slide back to a prior type of media is shit.

But we all read books and watch TV for different reasons, right? It's just sad it's mostly for the wrong reasons.

Posted by Hans Toshihide Törnqvist at 12:10 No comments:

I don't think much about my birthday these days, the administrator at work reminded me yesterday. So I took off a little earlier than usual to make sure I could cram in a shopping and baking session in the evening. Petit choux filled to the brim with wonderful créme de la mousseline, and a few more with the same filling but mixed with dark rum (cheap Negrita rum, I'm not really a rum connoiseur). I asploded one of the choux with the runnier rum créme and the only food disposer in this apt is my mouth, plus I wasn't exactly graceful with the pastry bag when done... Under the influence even before I go to work, excellent. And yet again the cashier in Systemet asked for my ID, 7 years in and still going strong :D Found some expensive Montrachet, maybe another time.

A better-than-expected photo on my balcony for the fellow surfer: 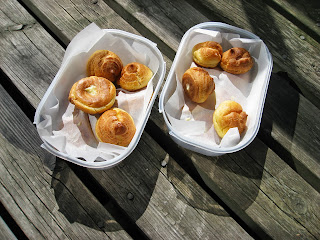 Posted by Hans Toshihide Törnqvist at 10:48 No comments: