I never noticed anything bad happening on any previous Friday the 13th. That all changed last night. A mere 30 minutes into the night, there was a huge power failure at work, and even when I left today many things were still offline. I was worried about our big shiny (actually matte) dipole magnet GLAD, turned out the so-called fridge had held up well. Last I heard earlier this week it was down to 9 K, that's not something one should not be worried about. Since my job relies very much on certain infrastructure out of my reach (making my own has crossed my mind several times, but I have to let some things be...), I went home early. Hmm, so actually it was not such a bad Friday after all.

My neighbour, who's building a new house, started with the earth-flattening pounding machines today, another sign delivered by this sinister day. One good reason to get out of bed though.

Other than that, it's been an ok Friday. Title should say "Ok Friday".

Started with BWV1001 recently, that's a really nice (and bleeding difficult) intro. And I'm finally getting the hang of the gigue in BWV1006, at least how the notes go since it's in a rather uncommon scale, next I'll need to figure out how not make it sound atrocious. Although that's the thing with well composed music, one can hear how pretty it is even if one cannot play it...

Oh right, I was on vacation in Sweden shortly after Dubrovnik, saw örlogsstaden Karlskrona. I also did a lot of reading up on old course material (finished spec. rel.) and lazying.

Bought myself an early little birthday present a few weeks ago, the thing is out of production and I thought it best to get it before the shelves run dry. I'm looking for a leather strap for it, I'll post photos once I've found one. For now I'll say it's a well known mid-tier Seiko, i.e. not very expensive but beautiful. Not punching hot ("dang dude dat ting be ragin'"), but it gets prettier and prettier with time, which for me is the "real beautiful". And that's important, because I'll probably have it close to me for many years to come. Oh come on, I'll just take a teaser photo: 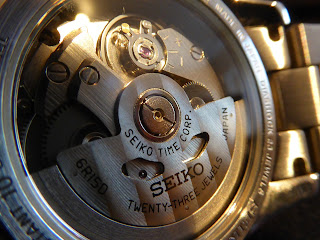 Posted by Hans Toshihide Törnqvist at 20:55 No comments: