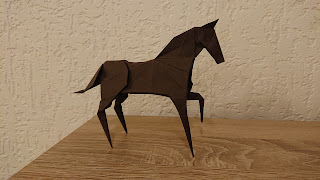 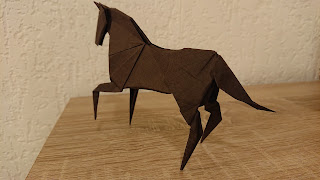 Horse by Komatsu Hideo, I've wanted to fold this for some time. Turned out ok. I don't want to shape it too much, at some point one could simply scrunch up wet paper and shape it to look like anything. Part of the charm with origami for me is how paper can be transformed with straight lines into complex and/or pretty figures. The paper's rather dark, because it's late and origami-shop didn't have any light colored papers left, I'd have preferred a lighter hue that's easier to look at. The paper is one quarter of a 70x70 cm2 biotope sheet, and at the start I thought "this is a bit big", then "hmm, this looks way too small", and at the end "perfect!" I'm a bit rusty at judging paper size and I never tried biotope before. This paper is almost like cloth, it's soft and feels "full/warm" but holds creases quite well, and most importantly you'd need a strong-man to tear this apart by hand. There's a lot of layers around the lower back and most other paper would have folded (pun intended, hah!). Paper such stronk. Reminds me of traditional Japanese origami paper, but smoother and heavier. I prefer mulberry with methylcellulose methinks, it's lighter and the creases are nicer but it's not as forgiving. I'll finish all my sheets though, no problem.

Now what shall I fold with all the other paper...

Posted by Hans Toshihide Törnqvist at 23:16 No comments:

A Life on Our Planet

Sir David Attenborough was 93 years old when recording his latest documentary earlier this year. He seems as young and energetic as always. I didn't watch much of his when I was young, but I'm getting the idea as I grow older. A Life on Our Planet feels very current and poignant even though the main narrative is about a rather long process, and I agree with pretty much everything he has to say. It makes me sad how many wouldn't, and maybe even worse how many would, but couldn't allow themselves to change their way of life. I feel like I'm improving, but I'm sure I can do better. Nobody expects an instant handbrake (good old gaming ref), but we should all try bit by bit.

It's become something of a meme with my colleagues how I complain about hot weather in general, when in fact my full statement is that I'm mostly fine relaxing in the shadows with 25 up to almost 40 degrees C which I've experienced a few times in my life, however it's very difficult to perform any physically or mentally streneous activities then. I hear air-cons solve everything, but already before Saitama and his training regimen I decided not to take that route. Actually, the moment I decided to not personally have an AC was when Louis CK said how white people are never happy with the world and must adjust it to their liking. Sure, he's a comedian, and to lots of people nowadays a horrible creature at best, but that doesn't mean his every statement is nonsense (this is a can of worms I probably shouldn't touch, but airing out is better than canning in). I'm doing my best to accept the world as it presents itself, and the facilities I was given to experience it.

There's so much we could do. Some of it good, some of it bad; to the environment, our health, others' health, morally, you name it. With regards to development and progress, some of it helpful, some of it not. Fun and boring overlap them all. I'll try to reduce the bad and unnecessary, and make as much boring into fun as I can. And not everything people want to me to do is necessary, so I need to consider how much I want to be part of that.

To end this post, I'll bring up a famous logical fallacy that is prevalent in this subject that I find very irritating and common among intelligent people. I cannot recall the name of the fallacy right now, but a particular application goes something like this:
"Why should we do anything when China pollutes the worst?"
A version that hits closer to home would be:
"You tell me to exercise more, so why don't you?"
Why does it matter what the other person does? Why not do good; yay if others join in, and you simply gained if they don't. Sure, if you look at numbers, you can present a narrative where improving the situation in China would be more effective than working on Sweden. But it does not follow that nothing would improve if Sweden did better, it's just laziness, convenience, and ignorance if Sweden doesn't. Now that we can be so well aware, so well connected, have so much knowledge and information so very close to us, the well developed and strong groups should strive for doing good, and the tools found on the way can be shared with others.
Or if you wish, there's a naive rebuke I really dislike myself, in where one could say that if we don't do anything we're just as bad. Don't use that on your kids, think better of them.

Posted by Hans Toshihide Törnqvist at 23:29 No comments: