My life didn't change very much since the "incident" has slowly progressed engulfed most of the world, however it is lonely at work from time to time. One great way to combat that is to exercise my nerdy hobbies, and one reoccurring is keyboarding. I never quite liked my Let's Split, I like things simple and small, and it was larger than I thought plus I don't really like split keyboards I suppose.

So after that weakly dramatic intro, let's continue where the previous post left off: 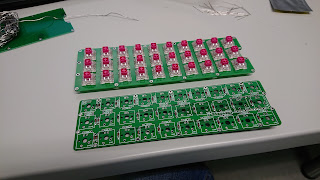 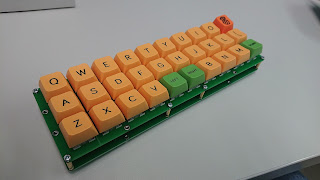 As always I was in great pain for several weeks trying to decide what and which and why. I was thinking that non-green PCBs would be neat, but decided finally it has to be green since it's a Gherkin. No LEDs because that's just annoying; I want a functional small great keyboard that's nice to look at, not a disco machine. Kailh Box Pink because I wanted something modern and light that's fun to type on with my weak nerd hands. And a very colourful keycap set to cheer me up every time I look at it. Shiny black SA with white print would have been great too, but I'm perfectly happy with my choice. I accidentally put both pin headers for the Pro Micro on the wrong side of the PCB, that lost me quite a bit of time. In the end, I got a keyboard better than I had imagined.

My thoughts, which might even be considered a review:
I don't see the point with going with 40% keyboards, just go straight for 30% and experience utopia. It's much nicer than my enormous Let's Split. Both need layers anyhow, even my 60% HHKB Pro 2 has an Fn key. One day I'll file down the pins on the Pro Micro, find shorter M2 brass stand-offs, possibly sunk-head screws and thinner rubber feet, but that's my only complaint. It's also perfect for introducing my thumbs in my typing for moar.
The Kailh Box Pink switches are glorious compared to the Cherry switches I've tried. Personally I could do with slightly lighter springs, but they cannot sell a strength for every taste, that's just silly. Very solid and smooth, and the crisp clicking is wonderful.
The keycaps are lovely, and a perfect match with the green PCBs. They look like candies and I want to eat them. That's good.

Now honestly, the initial reason for green PCBs, Kailh Box Pink rather than Jade, and the Pineapple keycaps, was that they were pretty much the only options available at the time in Europe... Turned out to be the perfect combination, I'm so fortunate :D

Still working on the layout and layers, another few weeks of headache and trial and error... Couldn't be better.

Posted by Hans Toshihide Törnqvist at 17:07