Title alludes to nothing.

No mandatory quarantine in Germany for travelers from Sweden any longer, yay, finally I can take vacation. Business ticket was cheaper than economy one way, so I'll have a crack at that. Biz was actually less expensive the other way, but then economy was even cheaper. I shouldn't get used to extravagant luxury anyhow, it's not my calling.

Why haven't I been making kefir earlier... In Sweden one buys it in 1L nicely disposable cartons just like milk. I've only been able to find kefir in smallish plastic cups or yoghurt in 1L plastic buckets here in Germany, so I stayed clear. Well, buy kefir once, keep a couple of spoons of it at the end, add milk, let stand warm for a day, and poof, 1 L of kefir. Life is too easy sometimes. I should bring one type I like from home.

I haven't done much (any?) origami lately, but I challenge myself from time to time, because it's still very relaxing. I need some external motivation these days, too bad. So, I was invited to a 4th of Juli celebration and I made this for the occasion: 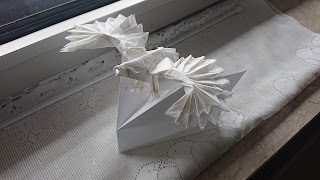 I didn't have time to treat it with methylcellulose so the body and legs ended up rather flimsy and wild, and the wings came out at the wrong height. I saw this model many years ago (Eagle v.2 by Nguyen Hung Cuong) and I've wanted to try it for a long time, so that's that one.

Bourree and Gigue are now mostly in my memory, so I'm working on them without having to stare at a book. I'm getting rather used to the E major scale, it doesn't take a complete paradigm shift in my mind to change to it any more. Some scales still help. Adagio is something else though, so many more techniques to get in place. I almost, almost cheated and went for bars 132..209 in the Chaconne, but I may not touch that yet, I'm not worthy. Adagio first, then...

EDIT 2020-07-18 00:42: Oh right, I started to watch Dark after a recommendation. I heard some time ago that someone else in the physics community had to stop watching because it was too wrong on certain touchy topics. Well, yeah, save for some really boring films/series that will always be the case for someone. So, I went in with an open mind, and imho somewhere between Stranger Things and Dark would be the perfect show of this kind. I liked the slick flow and production of Stranger Things season 1, but I prefer the more personal perspective in Dark, although many of the characters are a bit thin. Worst is the pacing and structure, they're a little weird. Great to see more of this stuff, and glad to see it's popular. And even though the writers seem to have foregone physics consultants, it's a lot better than Big Bang Theory which does get the physics right, however everything else in that show is hot steaming poo poo. Finally, I'm also glad to have learnt that the yt film reviewers I like are not over the moon with Blade Runner 2049, because outside of its technical implementations it doesn't have much. I wonder how long that 24 hour podcast will take me (yeah, I listen to the long men, blessed by the Don himself).

Posted by Hans Toshihide Törnqvist at 11:34